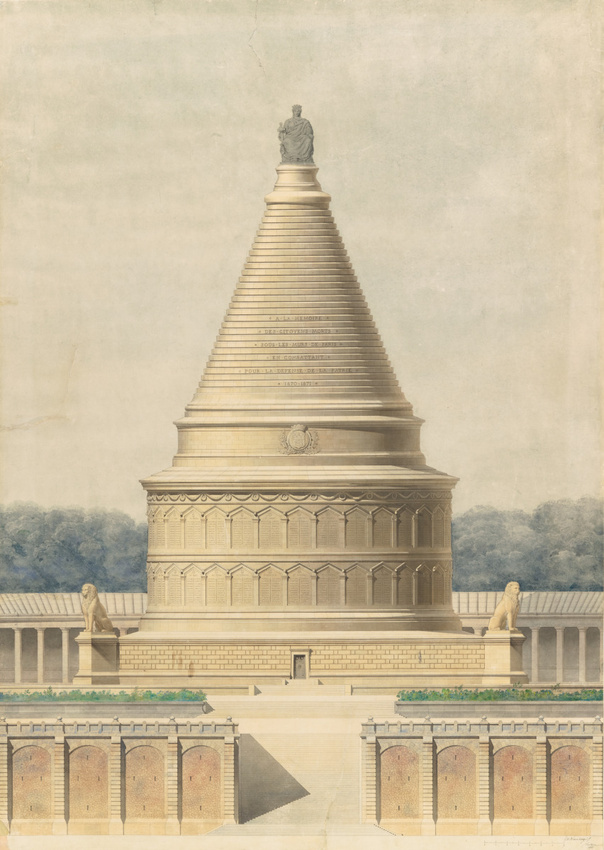 Very shortly after the French defeat at Sedan in 1870 and the disturbances of the Commune in 1871, the French Institute asked the architectural students at the École des Beaux-Arts to put forward proposals to commemorate the heroism shown by those who defended Paris. The annual Achille Leclère competition in 1871 therefore planned a monument "erected on the top of a hill alongside the Seine. It should be sober yet imposing, and large enough to be easily seen from Paris. One should concentrate on expressing the ideas of mourning and remembrance of the sacrifice [...]". The competition was won by Marcel Deslignières.
The project presented on this occasion by Alfred Vaudoyer in collaboration with Henri Ratouin, a friend from the same studio, was for an enormous pyramid-shaped tomb with broad steps leading up to it, surmounted by a statue representing the city of Paris. The edifice recalls the funerary architecture of Antiquity, particularly the famous Mausoleum of Halicarnassus. With its geometric shape and simplicity, this superb composition is also reminiscent of late 18th century structures. Perhaps this was Alfred Vaudoyer's way of paying tribute to his grandfather Antoine Laurent Thomas Vaudoyer (1756-1846) who was one of the great figures of Neo-Classicism.
Although a student work, this magnificent drawing was nevertheless published as an engraving in the November 1871 issue of Croquis d'architecture, and exhibited at the 1872 Salon. This too demonstrates how important this theme was to the French people, traumatised by recent events. In addition to this, the department of the Seine launched a competition in 1872 to erect commemorative monuments to the defence of Paris.