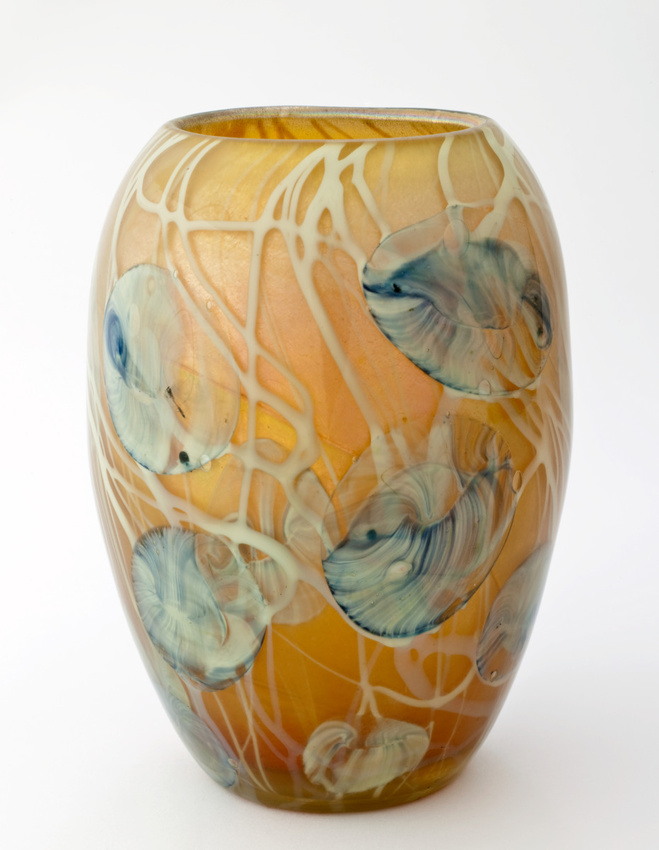 The son of Charles Tiffany, the founder of the great New York jewellers and goldsmiths Tiffany and Co, Louis Comfort Tiffany started as a painter and then worked as an interior decorator before taking an interest in glassmaking. In 1893, he set up the first glassworks known under his name, which produced many objects, stained-glass windows and light fittings over the following decades. He is particularly known for creating "favrile glass" which became the hallmark of Tiffany glass creations. "Favrile" is a 17th-century term meaning "belonging to an artist or his art", a forceful reminder of the importance of crafts in this period.
Tiffany strove for the iridescent effect of antique glass giving it a lustrous colourful look by adding metal salts to the molten glass. This vase combines gold flecks, white filigree and a convolvulus pattern with rare elegance.
The vase was bought for the Musée du Luxembourg in 1901 from the famous art dealer Siegfried Bing, whose gallery L'Art nouveau in the rue de Provence was instrumental in introducing international contemporary design to France. It had probably just been displayed at the Universal Exhibition in Paris in 1900, where Tiffany's work was much admired.