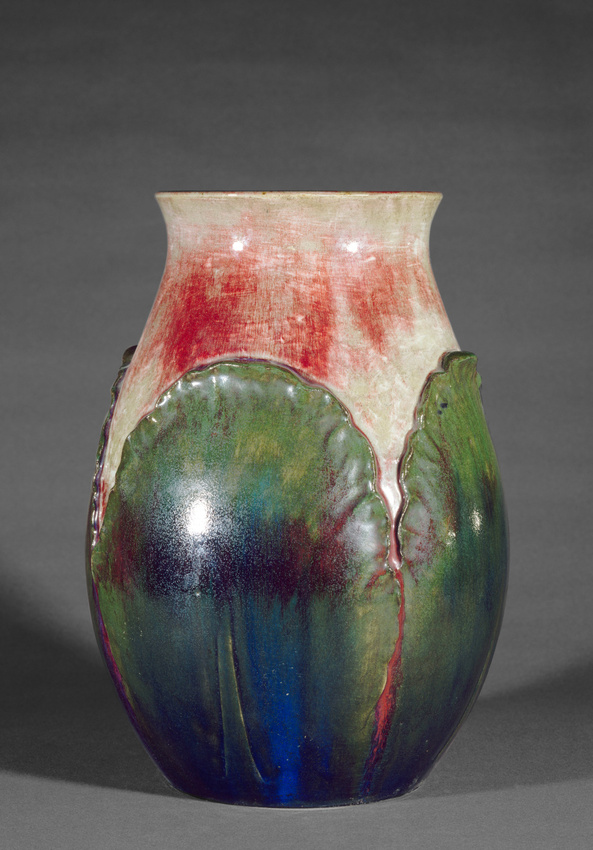 Like Carriès (1855-1894), Auguste Delaherche worked with stoneware in a new spirit; he did not incise patterns in the clay, which had been a common practice for Ernest Chaplet (1839-1909), whose workshop in the rue Blomet, Paris, he had bought in 1887. Interested primarily in the relationship between form, colour and materials, Delaherche liked plain, robust shapes inspired by Oriental, Greek or rustic pottery.
The allusion to nature – foliage and flowers engraved in negative or, as is the case here in this vase made in 1892, profiles of plant forms still in the bud – quickly disappeared from his work. Delaherche's great success is to have left very little to the hazards of firing and to have channelled the unruly flow of the glaze, forcing it to produce exactly the effect he wanted.
In 1894, he left Paris, where his works nonetheless continued to be sold by several depots, and settled definitively at Armentières, in the heart of the traditional region of the Beauvais potters. Ten years later he took a new step: he no longer called on assistants, he did without the throwers to whom he used to give his drawings, and thereafter all his pieces, whether stoneware or porcelain, emerged as he pleased from his own hands.