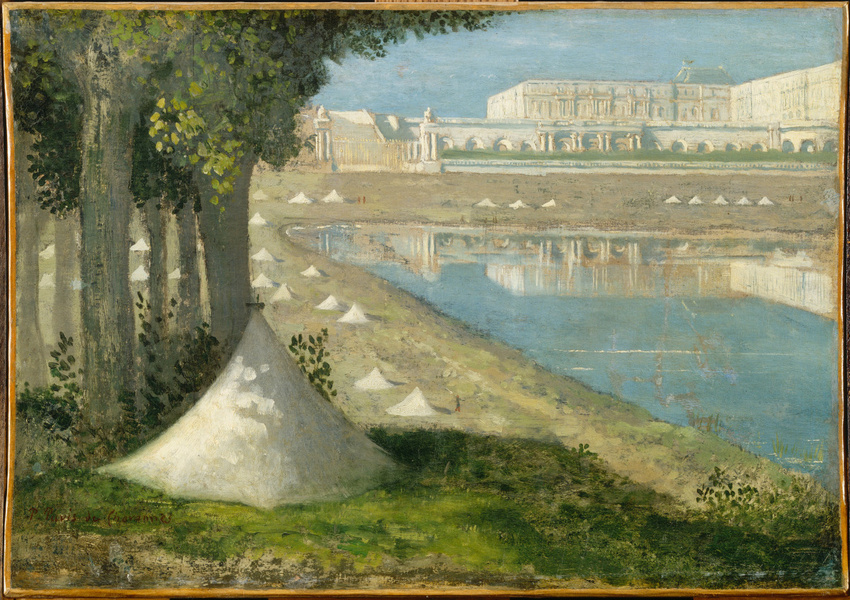 During the Spring 1871 Puvis de Chavannes, bitterly opposed to the Paris Commune, found refuge in Versailles. There he painted his first pure landscape: View of the Château de Versailles and the Orangerie.
A sketchbook, now housed in the National Gallery of Canada in Ottawa, indicates that the artist initially intended to compose a history painting complete with men and horses. In final painting however, only the tents of the provisional government soldiers - then stationed in the castle gardens - remain, lending an enigmatic quality to a landscape which seems frozen in mineral immobility.
This peaceful painting was realised in the gentle tones favoured by the artist. It is devoid of any dramatic or allegorical dimension, unlike two of his works of the same period; The Pigeon and The Balloon - gloomy evocations of Paris under siege by the Prussians during the winter 1870-1871 - also housed at the Musée d'Orsay. Everything seems to indicate that Puvis de Chavannes wanted to distance himself for a while from men and the events of the time, as he wrote to Berthe Morisot, "[to] take a genuine bath of grandeur in these admirable and magnificent surroundings, the sight of which calms one in telling of a beautiful and noble France, and [where] one may forget for a moment how cunning and perverted it is today".