Acquisition: Frantisek Kupka, The mysteries of the construction of the metro 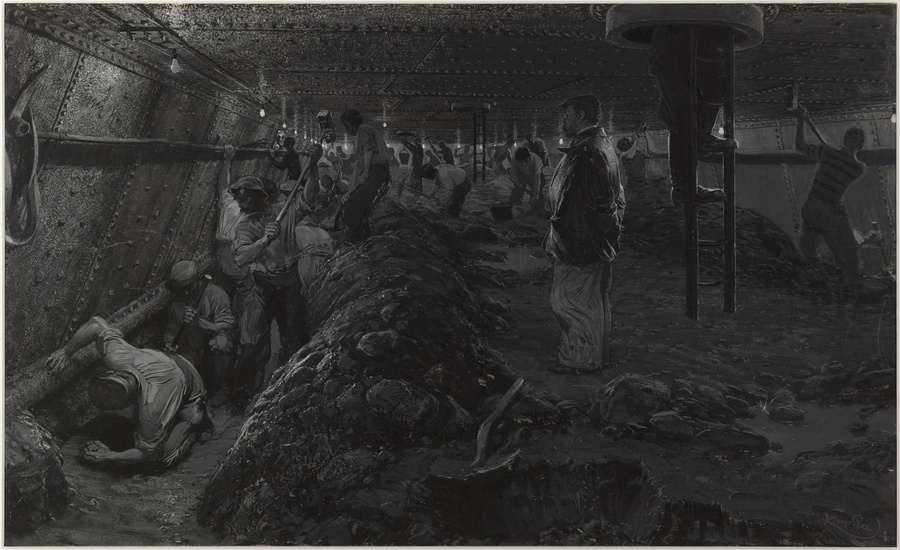 In 1896, when he settled permanently in Paris, Kupka earned his living as an illustrator and, through his drawings, drew a portrait of an unequal Western society enslaved to money. From 1900, he collaborated in many magazines and newspapers, the most famous of which is L'Illustration, for which was made the drawing The mysteries of the construction of the metro.

For the weekly satirical illustrated French newspaper,  L’Assiette au beurre, he created the issues L’argent [Money] (No. 41, January 11, 1902) and Religions (No. 177, August 20, 1904) whose drawings are now in the collections of the Musée d'Orsay. The artist would declare later in 1936, in Prague: “As a poor person, I lived with the poor, and that's how my militant satirical drawings were born. Yet, even under these conditions, I have been committed to maintaining the art of drawing at a high level.”

The drawing documents one of the most spectacular episodes in the construction of the Paris metro, the construction of the first sub-river line, the Orléans-Clignancourt line connecting the north and south of Paris, work on which began in 1905.
The most modern construction techniques of the time were used so that the workers could work dry under the Seine and insert, as they went along, tubular metal sections into the ground, previously assembled on the banks. The perspective and chiaroscuro lighting masterfully expressed through the monochrome of grays and punctuations of lead white give the impression of a huge, noisy, never-ending construction site, with workers working tirelessly on all levels of the building.

In the foreground, the shovel and ditch are highlighted, symbols of the work of this land no longer agricultural but industrial and underground. Two vertical figures dominate the troop of bent over and moving workers and supervise a complex construction site. One of them, who climbs a ladder, is visible only halfway up and seems to be emerging from a submarine, as from the Nautilus from 20,000 Leagues Under the Sea by Jules Verne (who died in 1905).
Like modern day Hephaestuses, the workers forge the material of the city of tomorrow, whose underground anatomy they model at the risk of being literally swallowed up by it. Kupka gives an epic breath to modern workers that evokes pages from Hugo (the sewers of Paris in Les Misérables for example) and Zola, mixing naturalism and visionary power.

Kupka's social and political aspect remains less known today than his abstract painting. Like many of his contemporaries, regardless of their affinity with any artistic movement, he bore witness to the urban and social changes of his time. The very high technical quality of his drawings and their iconographic complexity, the search for colors in the preparatory drawing, show the attention he paid to this art.

The mysteries of the construction of the metro made its entry into our collections thanks to a gift from Mr. Jean-Louis Milin, made through the Société des amis du musée d'Orsay et de l'Orangerie.