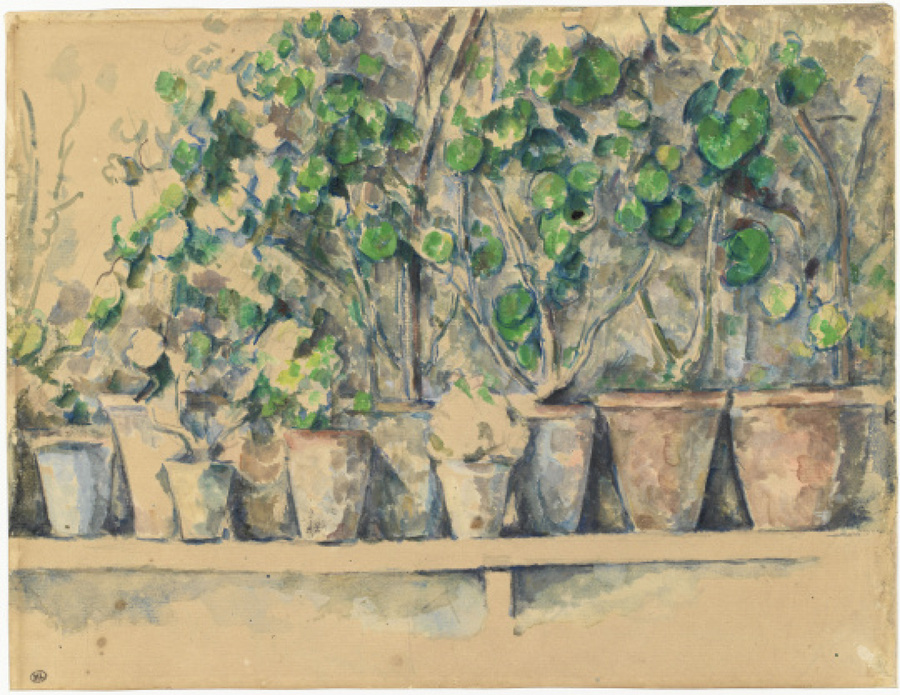 The Origins of the Collection

At the inception of the Musée d'Orsay, the drawings from the second half of the 19th century were not separated from the Louvre's collections and, like later acquisitions, are still on the inventory of the Graphic Arts department of the Louvre. However, about seventy drawings in the fields of architecture and the decorative arts (architectural drawings by Viollet-Le-Duc, for example) and the framed pastels were transferred to Orsay and are exhibited in the museum on a rotational basis.

For drawings, as for most techniques, the Musée d'Orsay's collection covers artists born after 1820 and before 1870. But exceptions have been made on historical or stylistic grounds: Matisse (born in 1869) is excluded, except for the painting Luxe, calme et volupté [Luxury, Calm and Voluptuousness] (1904), which marks the transition between the collections of the Musée d'Orsay and those of the Musée d'Art Moderne. Some artists born before 1820 are included, namely Honoré Daumier, François Bonvin, Gustave Courbet, Charles-François Daubigny, Henri Harpignies, Ernest Meissonier and Jean-François Millet.

The constitution of the drawings collection was conditioned by the history of the national modern art collections in the second half of the 19th and the early 20th century. The core collection came from the Musée National du Luxembourg, which was inaugurated in 1818.

After a slow start, acquisitions of drawings picked up in the 1880s as the museum tried to give a fair representation of contemporary art. An acquisition policy then took shape, and drawings were purchased at the Salon, studio sales and posthumous auctions. State purchases for the Luxembourg included the studio collections of Henri Regnault (1872), Jean-François Millet (1875), Gustave Guillaumet (1888), Johan-Barthold Jongkind (1892), Ernest Meissonier (1893), François Bonvin (1893), and Edgar Degas (1918 and 1919).

The Luxembourg also had a Special collection of sketches, drawings, models and original documents related to paintings and statues which have been exhibited at the Luxembourg since its inception. Donated by the artist themselves, these works were regarded as archives. A drawing by Rodin after his Saint Jean-Baptiste [St. John the Baptist]  comes from this collection.

From the Musée du Luxembourg to the Louvre

It was, unquestionably, gifts, donations, and bequests that built up a reference collection for the history of French drawing. Gifts are made by the artists themselves – Jules Elie Delaunay (bequest, 1891), Eugène Boudin (bequest of studio collection, 1900) – or by their descendants or families.

Generous donors include the heirs of Pierre Puvis de Chavannes (gift, 1899), Colette Desormière, the daughter of Théophile Alexandre Steinlen, (bequest, 1970), Arï Redon, the son of Odilon Redon, (bequest, 1970) and his wife Suzanne (bequest, 1982), and eminent collectors: Etienne Moreau-Nélaton, Léon Bonnat, Carle Dreyfus, Isaac de Camondo, Claude Roger-Marx, and others.
Drawings from foreign schools remained poorly represented in the Musée du Luxembourg, despite the efforts of Léonce Bénédite, who took over as curator in 1892, gifts from artists (Edward Burne-Jones gave three studies of heads in 1893, John Leighton Étude pour Andromaque [Study for Andromache] in 1893 and Alma-Tadema Le couronnement d'Esculape [The Coronation of Aesculapius] in 1903), and a few purchases. In 1922, the entire foreign collection at the Luxembourg, including the drawings, was transferred to the Musée du Jeu de Paume.

As a "museum of living artists," the Luxembourg sought to reflect contemporary art. A few years after the artists died, their works were supposed to be transferred – to the Louvre for the most prestigious among them and to other institutions for the others. Major transfers were made to the Louvre in 1929, 1930 and 1931. When the Musée du Luxembourg closed in 1937, the most contemporary collections made up the core collection of drawings at the new Musée National d'Art Moderne (created in 1937, but the transfer was delayed by the war).

Acquisitions by the Musée d'Art Moderne developed the collections of works by the Nabis with drawings by Pierre Bonnard, Edouard Vuillard, Félix Vallotton, and to a lesser degree, that of the Post-Impressionists (watercolors and drawings by Paul Signac bought in 1957, for example). The MNAM also purchased drawings by foreign artists, such as a set by James Ensor in 1964.

In 1977, when the new Musée National d'Art Moderne was opened in the Centre Georges Pompidou, drawings by artists born before 1870 were sent from the Musée d'Art Moderne to the Graphic Arts Department of the Louvre.

This heritage, consolidated by more recent acquisitions, now amounts to over 80,000 drawings. The collections have been steadily enlarged since the inception of the Musée d'Orsay by the acquisition of masterpieces   of French drawing such as Le nœud noir [The Black Bow] by Georges Seurat (bought in 1989), Portrait de Manet [Portrait of Manet] by Edgar Degas (bought in 1997), the Autoportrait [Self-Portrait] by Gustave Courbet (bought in 2003), as well as studio collections (Osbert, Fevre-Degas), press cartoons (drawings by Herman-Paul covering the revision of the Dreyfus trial in Rennes and drawings by Frantisek Kupka for L'Assiette au beurre, bought in 2001), drawings of artists previously poorly represented in the collections such as Maurice Denis (illustrations for Sagesse by Paul Verlaine and The Little Flowers of St. Francis of Assisi, bought in 2003), William Bouguereau (sketchbooks, bought in 2002) or foreign artists (Léon Spilliaert, Autoportrait dit aux masques [Self-portrait with Masks], bought in 2005).

The acquisitions of these outstanding or less prestigious works enable the collections of the Musée d'Orsay to present an increasingly accurate picture of drawing in the second half of the 19th century.