History of the pastel collections 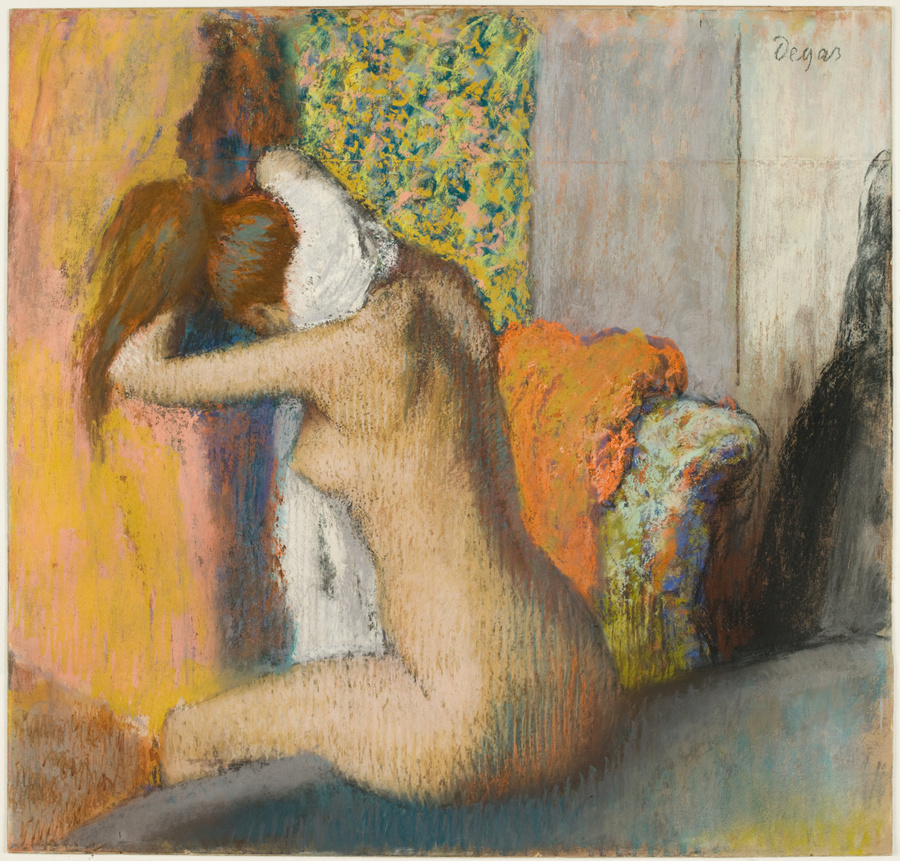 The Musée d'Orsay has an exceptional collection of nearly 500 pastels (467 in 2020). It is one of the finest collections in the world, including a reference collection of major works by Edgar Degas (1834-1917) and Odilon Redon (1840-1916), artists who profoundly renewed the art of pastel and placed it at the center of their artistic practice.

Discovered during the Renaissance, pastel was first used to enhance preparatory studies for paintings with color. In the 18th century, it became an artistic form in its own right and was then mainly associated with the art of portraiture, as it lends itself wonderfully to the rendering of skin tones and fabrics and to the expression of the models' eyes and bodies.

The second half of the 19th century, in line with a taste for the 18th century, saw the revival of the pastel, widely explored by many draftsmen and painters. Located at the edge of drawing and painting, and applied on paper or, more rarely, on prepared canvas, pastel is a mixture of pure pigment powder, a mineral filler and a binder that solidifies the whole into a solid and compact stick. It allows you to work directly with color, much faster than oil paint, and without any drying time. It offers artists a wide range of bright and intense ready-to-use shades to work with.

Volatile and powdery, pastel does not adhere naturally to any surface and is often combined with a fixative whose formula depends on the artist and remains a studio secret. Fixed or not, pastels are particularly fragile, not only when transported but when subjected to light as well. Preserved in the museum's reserves, they are therefore presented in rotation in hangings and temporary exhibitions at the Musée d'Orsay.

The end of the 1840s saw a revival of pastel, with Jean-François Millet (1814-1875) and Eugène Boudin (1824-1898), the latter using it for his countless outdoor sky studies. Millet exhibited few pastels during his lifetime and it was not until 1875 that they were revealed to the public at the sale of Emile Gavet's collection.

If the State did not buy at this sale, two magnificent pastels from the Gavet collection nonetheless entered the French national collections following bequests: La Femme au puits [Woman at a well] (1866-1868, Alfred Chauchard bequest to the Louvre Museum in 1906) and Le Bouquet de marguerites [The Bouquet of Daisies] (1871-1874). They bear witness to the late practice of pastel by Millet, inspired by 17th century Flemish and Dutch art; one which combines black pencil drawing and dry pastel in an original way.

The Musée d'Orsay owns eleven pastels by Edouard Manet (1832-1883), most of which were acquired through bequests of the models and the bequest of the Isaac de Camondo collection to the Louvre in 1908 (Portrait d’Irma Brunner [Portrait of Irma Brunner]), an exceptional ensemble given the relative rarity of its production. The artist began working in pastel in the 1870s, without any underlying drawing, constructing his subject directly through color, on white canvases (unlike most of his contemporaries who practiced pastel on paper).

Manet's pastel portraits are extremely delicate, concise and vibrant with light (e.g., portraits of Mademoiselle Hecht) and his women at their toilette (Le Tub [The Tub]) contrast their sensuality and softness with the harshness of Degas' nudes. The soft and velvety tones of his pastels bring him closer to Eva Gonzales (1849-1883), presented in a pastel (La matinée rose [The Pink Morning]), acquired by the State in 1885 for the Musée du Luxembourg.

Edgar Degas' collection of pastels provides a glimpse of the evolution and variety of the artist's technical practice, from the studies for paintings (Etude pour Sémiramis construisant Babylone [Study for Semiramis Building Babylon], Senn donation, 1976) to the flamboyant color "orgies" of his late works (Danseuses en bleu [Blue Dancers], donated by Baroness Eva Gebhard Gourgaud, 1959), through the landscapes of 1869 and the early 1870s, the works in the Impressionist exhibitions of the 1870s (Femmes à la terrasse d’un café le soir [Women on the terrace of a café in the evening], Les Choristes [The Chorus], etc.) and the series of nudes from the 1880s to the 1890s.

The richness of the collection is particularly linked to the generosity of collectors and includes several masterpieces from the bequest of Isaac de Camondo's collection to the Louvre in 1908, including Danseuse au bouquet [Dancer with a Bouquet], Le Tub [The Tub], Après le bain femme s’essuyant la nuque [After the Bath, Woman Drying Herself], and the bequest of Gustave Caillebotte to the Musée du Luxembourg in 1894 (L’Etoile or Danseuse sur scène[The Star or Dancer on the Stage], Danseuse assise [Dancer Sitting], Femmes à la terrasse d’un café le soir [Women on the terrace of a café in the evening], etc.).

The collection bears witness to Degas' extraordinary inventiveness in the pastel technique. He develops the pastel on monotype (drawing with bold ink and printed), which gives a preliminary black and white grid to the work. He invented the technique of pastel on tracing paper laid in successive layers, using a fixative that allowed the layers to be superimposed without mixing them and experimented with processes to preserve the extraordinary texture, luminosity and brilliance of his pastels, which time has not altered.

Among the impressionists, we can mention the small set of pastels by Mary Cassatt, portraits of women and children, one of which was offered by the artist to the Musée du Luxembourg in 1897. Gustave Caillebotte is represented by three pastels, two of which entered the collections in 2019 thanks to the Daurelle bequest. Among the jewels of impressionist pastels, let us mention the portrait of Edma Pontillon by Berthe Morisot, a melancholy portrait of the artist's sister, the Waterloo Bridge in London by Claude Monet and some magnificent portraits by Auguste Renoir which revive the tradition of the 18th century.

Redon's pastels from the Musée d'Orsay collection have entered the national collections through bequests, gifts or donations and a few purchases. In 1982, the most important set, comprising eleven pastels, came from the donation of the artist's studio collection by his daughter-in-law, Suzanne Redon, according to the will of Arï, Odilon’s son, including Vision sous-marine [Underwater Vision], Marie Botkin, La Coquille [The Seashell],etc.

The collection is rich in symbolist works, which privilege suggestion over description and make pastel the ideal adjunct to mystery and dream. Some works by Lucien Lévy-Dhurmer (1865-1953), most of them from the Zagorowsky donation to the Louvre in 1972, are true icons of the collection, such as Méduse or Vague furieuse [Medusa or The Angry Wave] (1897) and La Sorcière [The Witch] (1897).

Among his contemporaries close to symbolism, we can mention William Degouve de Nuncques whose Nocturne au Parc Royal de Bruxelles [Nocturne in the Parc Royal, Brussels] (1897, acquired by the Musée d'Orsay in 1982) is in dialogue with several pastels with a twilight or nocturnal atmosphere: Un parc la nuit [A Park at Night] by the Hungarian Josef Rippl-Ronai (SAMO donation, 1994), Claire de Lune et lumières [Moonlight and Light] by Léon Spilliaert (1909, donated by the artist's daughter in 1981 to the Musée d'Orsay), Le dernier labeur du jour [The Last Task of the Day] by Giovanni Segantini (1891, purchased in 1979).

This mysterious and suggestive dimension, wonderfully expressed through the technique of pastel, is found in the works of Catalan artist Joan Gonzales (1868-1908), which entered the collections thanks to his niece's donation to the Louvre Museum in 1969.

The Musée d'Orsay also has a reference collection of Nabis pastels, represented by about fifty pastels, more than half of which are by Edouard Vuillard, many of them coming from the artist's bequest to the Musée du Luxembourg in 1942. This corpus includes experimental works of great modernity from the end of the 19th century to the portraits, landscapes and still lifes of Bonnard and Vuillard from the 1920s and the great mythological compositions of Ker-Xavier Roussel.

In the intimate and modern vein of Vuillard's pastels from the beginning of the last century, are those of Marguerite-Jeanne Carpentier, an artist recently rediscovered thanks to the commitment of passionate collectors (Portrait de Marguerite Cahun [Portrait of Marguerite Cahun], 1910, Boyer donation, 2020).

She enriches the corpus of women artists, still to be built up (22 pastels by ten women), the latter having practiced a lot of pastel, considered as a "minor" technique, especially in the genre of portraiture. Among them are the Russian Marie Bashkirtseff (1860-1884) and the Swiss Louise Breslau (1856-1927), whose pastel portraits were acquired very early on by the State (Bashkirtseff, Portrait de Madame X [Portrait of Madame X], purchased by the State in 1885, and Breslau, Deux jeunes filles assises sur une banquette [Two Young Girls Sitting on a Bench], acquired in 1897).