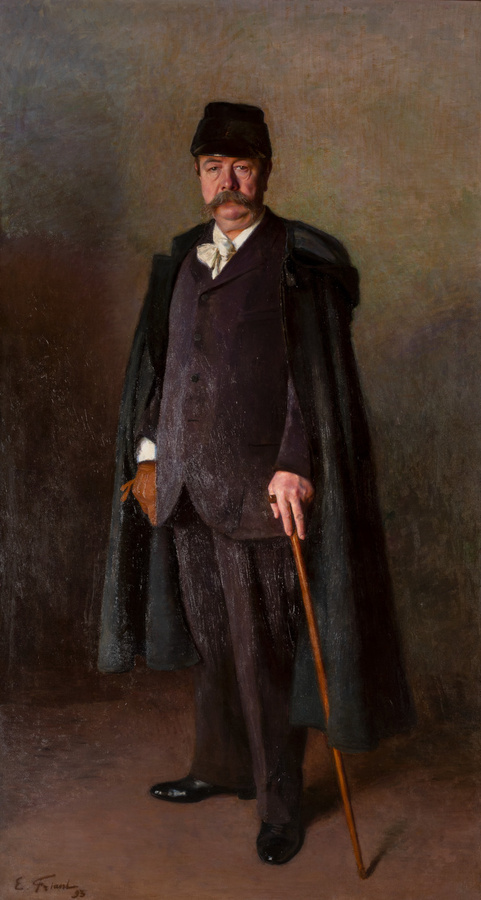 The Musée d’Orsay has recently acquired an impressive portrait by Émile Friant (1863-1932), depicting the founder of modern Haute Couture, Charles Frederick Worth (1825-1895). This life-sized, full-length portrait dated 1893 shows the couturier towards the end of his life, dressed in the kind of dark “artist's” clothing he liked to wear – pared down, almost austere, it was the typical attire of a creative genius.

Of English origin, Worth came to live in Paris at the age of twenty, and today is seen as the father of modern French Haute Couture. He was the first in his profession to claim for himself the status of artist, in that he received his clients at his home or in his salons on Rue de la Paix rather than going to their houses himself, created his designs before presenting and selling them, and didn’t work to meet demand; he imposed his own taste on his clientèle and set the sartorial standard in terms of good taste; he used the most expensive materials, and demanded very high prices, choosing his customers according to the price of his creations; he presented his designs on live models; he exhibited his new collections by staging biannual, occasionally theme-based, fashion shows; and, last but not least, he had his own designer label – his signature – sewn on all his designs.

Known for his irascible, autocratic temperament, here Worth is dressed in his normal attire – the discreetly elegant dandy, leaning somewhat towards a certain artistic Bohemianism. The portrait is striking in its overall simplicity, with its undifferentiated background, subtly enlivened with a single light effect, and with no furniture, no signs of wealth, and nothing whatsoever in common with the Neo-rococo profusion of his private mansion. Such simplicity contrasts sharply with the highly decorative nature of both his designs and his own personal taste. The portrait thus deliberately fosters a certain image, that of a creative, solitary genius, far removed from that of a businessman grown rich, who had been assimilated into the same class as his clientèle.