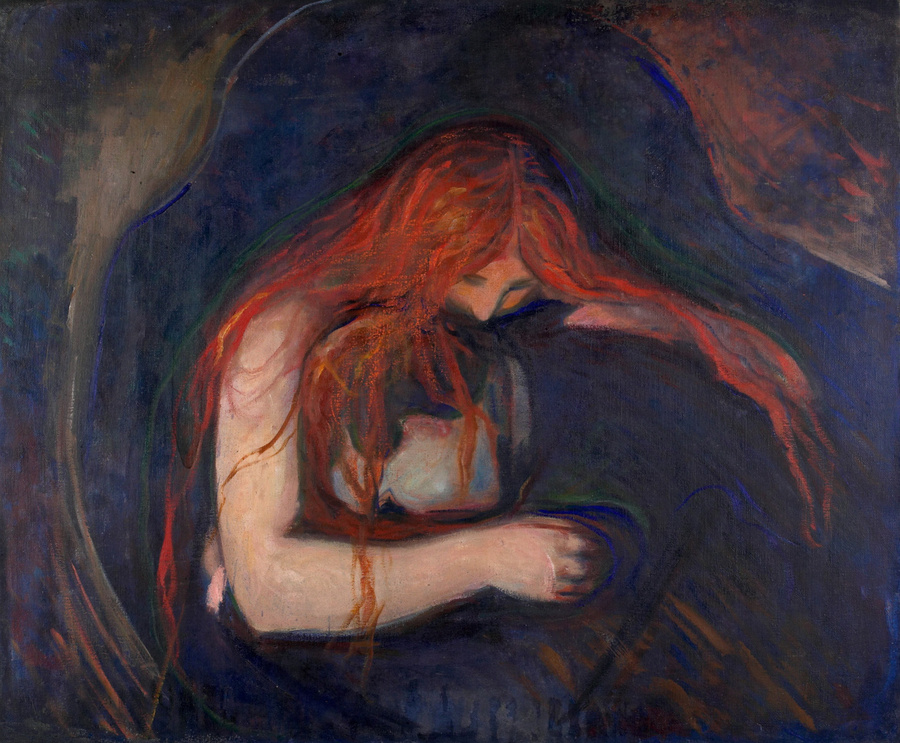 Claire Bernardi, Director, Musée de l’Orangerie, and Estelle Begué, Documentary Research Officer, Musée d’Orsay, are curating the exhibition "Edvard Munch. A Poem of Life, Love and Death", on display at the Musée d'Orsay from September 20, 2022 to January 22, 2023. Through their answers to our questions, they give us the keys to better understand the creative work of the Norwegian master. A work that spans over sixty years and whose ambition, scope and great coherence still impress today.

Why does "The Frieze of Life" appear to be the central theme of this exhibition?

Claire Bernardi / Estelle Begué – This project was at the very heart of Munch’s career; he was convinced that his works were more meaningful if they were grouped and therefore decided to present them in a “series”. He hoped that this would make his art easier to understand as his early exhibitions all caused outrage. His exhibition in Berlin in 1892 closed after a week due to negative reactions. The public found the unfinished appearance and radically inventive aesthetic of his works disconcerting. In The Frieze of Life, Munch organised his ideas around love and then expanded this to include other major impulses of the soul such as anguish, existential doubt and facing the reality of death. In it, he explored all the significant stages and emotions which punctuate a lifetime. He offered his unique and personal vision of the world, in which life and death are inextricably associated and nature plays a key role in revealing and conveying emotions. Munch refined and modified his ideas over the course of his exhibitions and there is therefore no definitive version of this cycle which encompasses many of his major works, and primarily the different versions of the famous Scream.

Why are illness and death so prominent in Munch’s work?

Claire Bernardi / Estelle Begué – Munch wrote in one of his notebooks: “Disease, insanity and death were dark angels watching over my cradle.” This grim observation is a reminder of the omnipresence of these three scourges in Munch’s life from infancy. His mother died of tuberculosis when he was just five years old. His elder sister Sophie died of the same disease less than ten years later, and he almost succumbed to it himself. In order to try to come to terms with these trials, his father, a deeply religious man, was assiduous in his devotions and fostered a serious and austere atmosphere in the family home. As an adult, another of Munch’s sisters, Laura, developed serious mental health issues and was institutionalised for much of the rest of her life. Munch’s brother, Andrea, died suddenly of pneumonia at the age of twenty-five, shortly after getting married. This over whelming series of family tragedies and childhood traumas led Munch to develop a clear interest in his work in recent scientific and medical discoveries of the day, which attributed a key role to heredity as a factor in the appearance of both physical and mental illness. 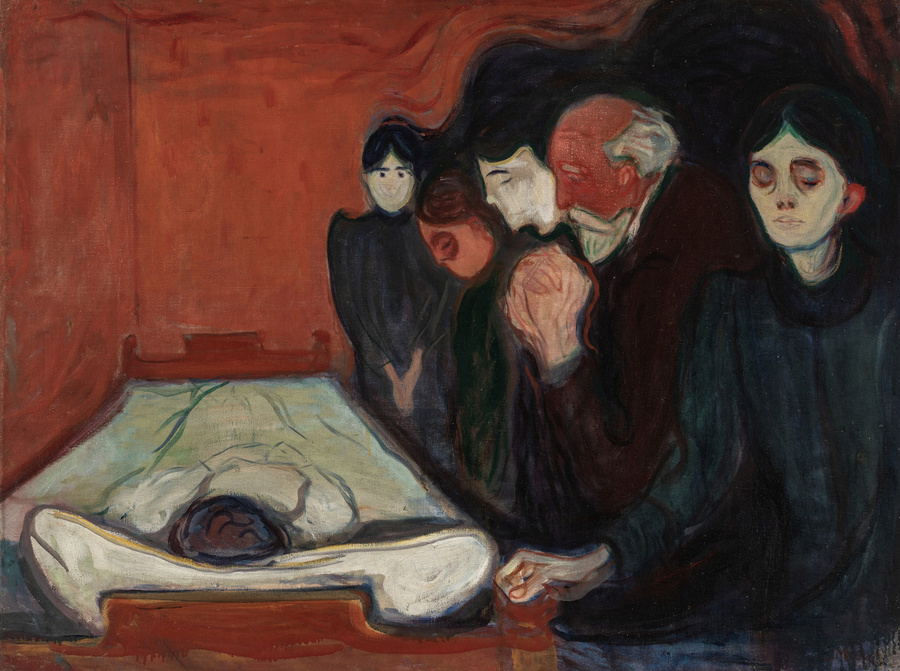 Why do some motifs appear to be endlessly repeated?

Claire Bernardi / Estelle Begué – Many of Munch’s contemporaries practised the art of reprising subjects, but for him this was not a formal exercise or the simple study of a motif. He viewed his work as a whole in which pieces resonated with each other. Certain specific elements were used to unify the works. He defended these echoes in the paintings making up The Frieze of Life, and wrote: “The sinuous line of the coast runs through the paintings, and bey-ond it, in perpetual motion, the ocean, and beneath the treetops, life in all its many forms unfurls with all its joys and sorrows.” In tandem with decorative aspects, he sometimes reprised the actual structures of compositions, such as the very strong diagonals which enclose space in a painting and accentuate the dramatic intensity of the subjects. Lastly, Munch produced several versions of some pictures using different techniques such as painting and engraving. However, he rejected the term “copy” as each reworking had its own particular meaning. This allowed him either to capture more closely the exact feelings experienced during the specific event which inspired the motif – for example in the many versions of The Sick Child – or to find the most accurate vision of the message of the work, as in the sketches for the decorative scheme for the Aula (University of Oslo). In this scheme, the artist was keen to express the regenerative power of light, the hope that is born with every new day, and the dazzling experience of the awakening of knowledge. These multiple versions also allowed him to keep a record of his work in its integral form over time as collectors and museums acquired pieces. 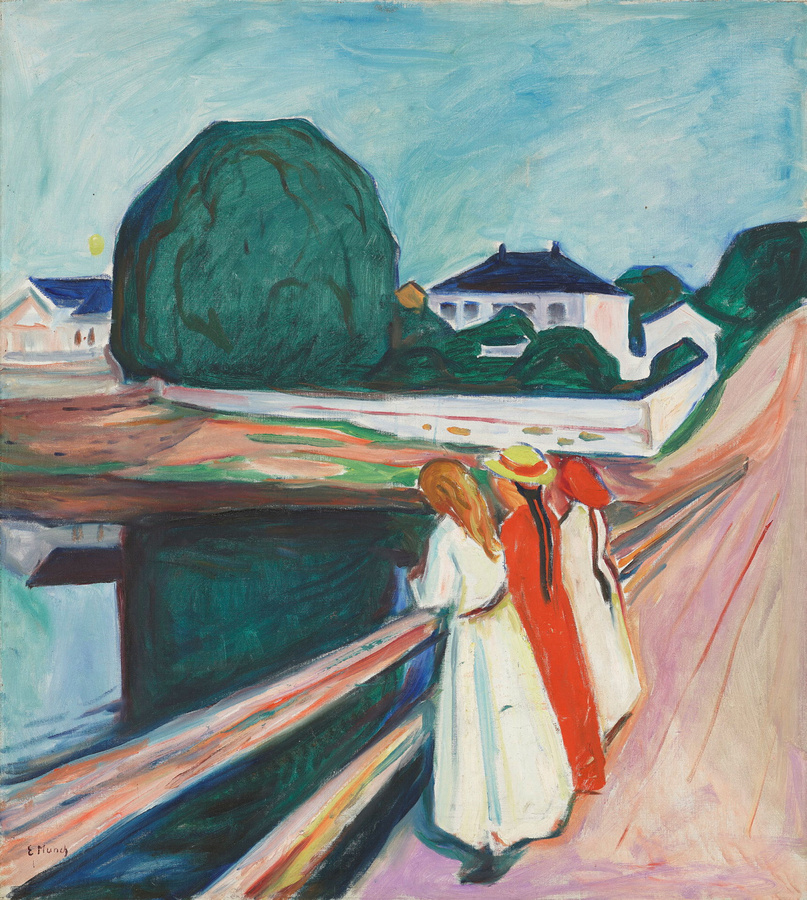 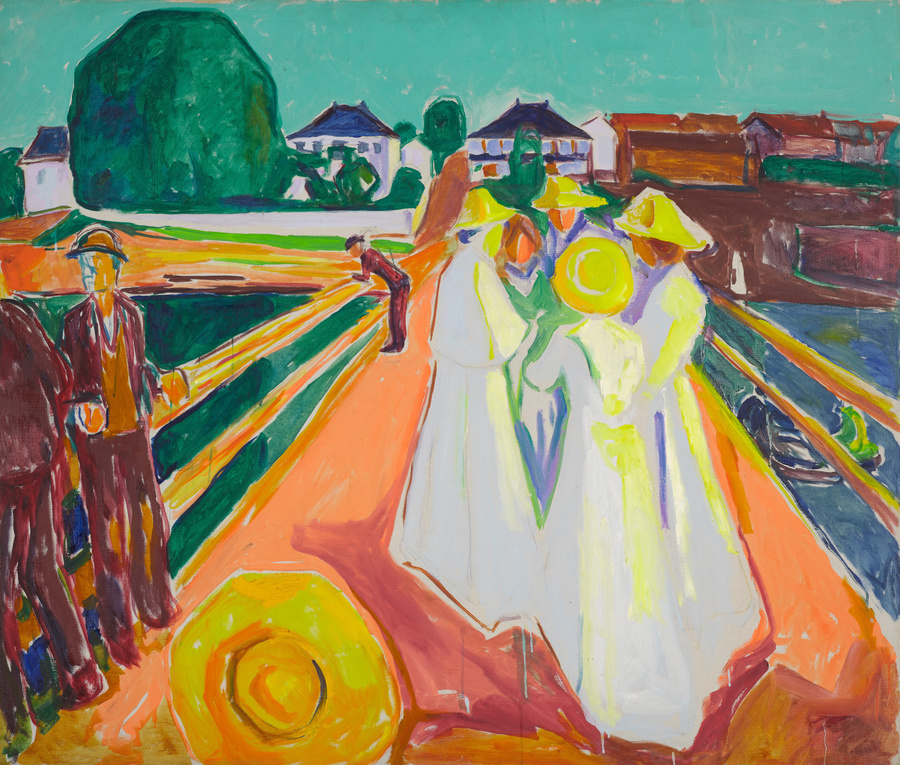 Prints play an important role in Munch’s work. What was his approach?

Claire Bernardi / Estelle Begué – Munch learned the art of printmaking in 1894 during a stay in Berlin. He began by mastering etching and drypoint techniques, then printed his first lithographs in 1895. He turned to woodcuts in 1896. We do not know exactly why he developed a particular interest in printmaking, but he may have viewed it as an opportunity to disseminate his work more widely. He was also curious about this technique which was not common in Norway, and was keen to become a pioneer in the field. He placed a particular emphasis on his prints, which he soon presented in his exhibitions on an equal footing with his paintings.

Before long, he moved away from traditional techniques and embraced a more personal form of practice. Munch often enhanced his prints with gouache and watercolour highlights, even adding whole motifs in this way so that they became unique works. In order to mitigate the issues associated with printing in colour, he combined techniques and his printed plates were sometimes produced from a combination of wood and zinc matrices. He developed the habit of cutting out blocks of engraved wood with a saw and isolating the different elements of his compositions. This meant that he could fit them together like a jigsaw puzzle and ink the pieces in different ways. The inventiveness and freedom of practice demonstrated in his prints reflect his approach to his paintings. 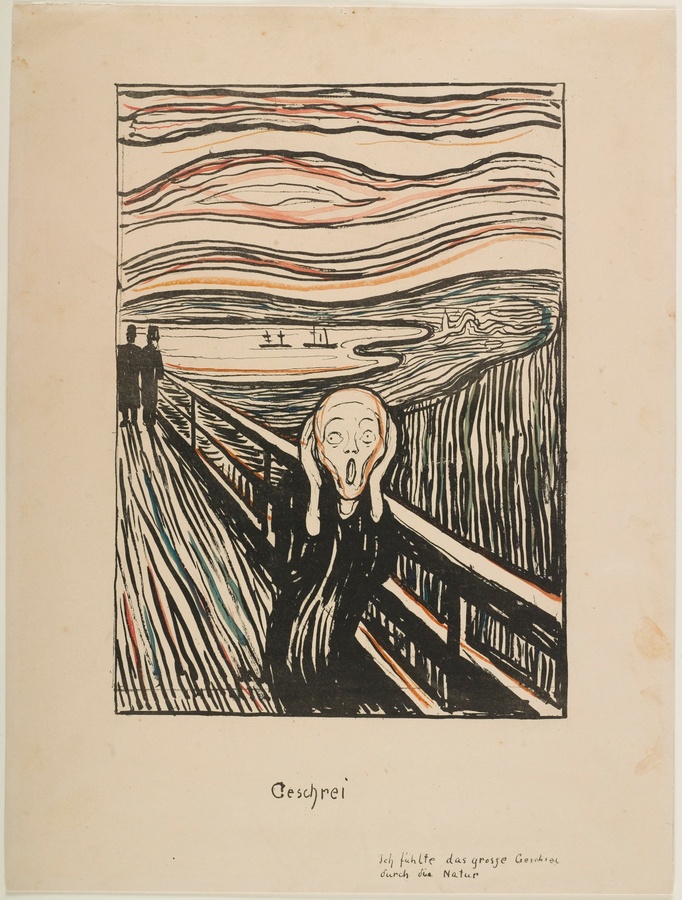 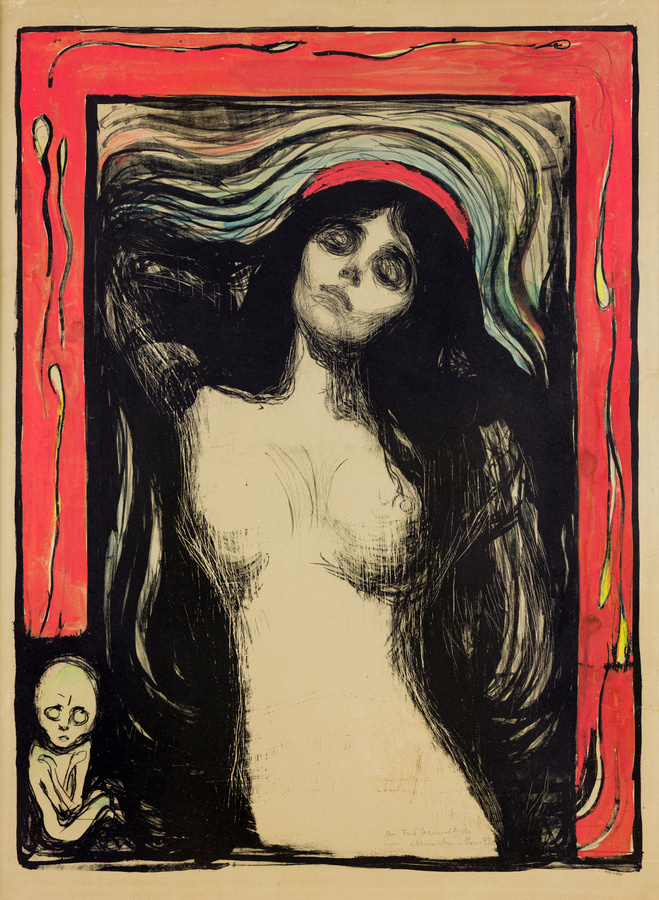 What was Munch’s relationship with the theatre scene?

Claire Bernardi / Estelle Begué – Munch was very interested in contemprary theatre and frequented a number of playwrights, especially during his stays in Berlin. He was friends with August Strindberg, and produced an engraved portrait of him. In 1896, Munch embarked on a brief collaboration with Aurélien Lugné-Poe, the director of the new Théâtre de l’Œuvre in Paris. He produced illustrated programmes for two plays, Peer Gynt and John Gabriel Borkman, by the Norwegian playwright Henrik Ibsen, whom he admired greatly. In 1906, he pursued a more extensive collaboration with the German theatre director Max Reinhardt, founder of the Kammerspiele in Berlin, a theatre which forged a new relationship between the stage and audiences. He commissioned Munch to produce elements for the sets of two other plays by Ibsen: Ghosts and Hedda Gabler. He embraced this task wholeheartedly and it had an immediate impact on his own work. His approach to the construction of space changed quite conspicuously. This is particularly clear in a series of paintings entitled The Green Room [The Murderess is part of this series], dating from 1907, straight after this collaboration. In it, Munch revisits the main elements of Reinhardt’s sets as a unique space, in the form of a room from which a wall has been removed. He also places objects in the foreground of the paintings to banish the sense of distance from the spectator. For example, we can see a truncated table which seems to extend beyond the painting.

What do Munch’s many self-portraits tell us about him?

Claire Bernardi / Estelle Begué – Munch practised self-portraitu throughout his career. This was an important way for the artist to mark the major milestones in his life. His youthful portraits, such as Self-Portrait with a Cigarette, captured an artist secure in his own talent, who was able to play with the pictorial conventions of his day and willingly present himself as a bohemian. His subsequent self-portraits highlighted his profound weaknesses and the inner doubts which plagued him. He had no qualms about presenting himself in an extremely vulnerable way in Self-Portrait in Hell, for example. Later, Munch depicted himself as an elderly man with great honesty, by facing old age and death unflinchingly. His self-portraits frequently included an allegorical dimension. He symbolised the difficulty of creating in The Flower of Pain, for example. The artist often drew inspiration for his depictions from literary texts which reflected his own interests, notably plays by Ibsen. On several occasions, he assumed the guise of John Gabriel Borkman, a character confined to his room for many years by obsessive thoughts. His self-portraits were not confined to paintings and engravings. Munch was keen on photography and regularly photographed himself among his works in a manner reminiscent of modern “selfies”. His work overall is highly autobiographical and draws inspiration from the many tragedies punctuating his life

How can Munch’s style be described?

Claire Bernardi / Estelle Begué – In many respects, Munch is an artist who defies categorisation. His training does not link him to any specific movement. His maternal aunt, Karen Bjølstad, introduced him to painting and drawing as a child and he enrolled for several months at the Royal School of Art and Design in Oslo, but Norway did not yet have a proper art academy. He then worked under the painter Christian Krohg, who transmitted his own passion for French naturalist painters and the impressionists to him. Munch’s youthful works, and in particular those produced during his first trips to Paris, were characterised by plein air work, free handling of colour, and a focus on the emotions of his sitters. These latter two elements were at the heart of his work in the early 1890s, when he turned to Symbolism. He was also interested in the principles of synthetism (synthesis between the chosen motif, the artist’s feelings, freedom of form and colour) developed by Émile Bernard and Paul Gauguin. He shared their extremely radical aesthetic approach. The psychological and dramatic intensity of his works, the use of very bright or even garish colours, and an emphasis on expressing powerful emotions which deliberately challenge the viewer, mean that Munch has often been described as a precursor of Expressionism. But far from adhering to a movement, and unconcerned by attracting followers, his work is characterised by great aesthetic freedom which expresses a unique vision of the world and life. 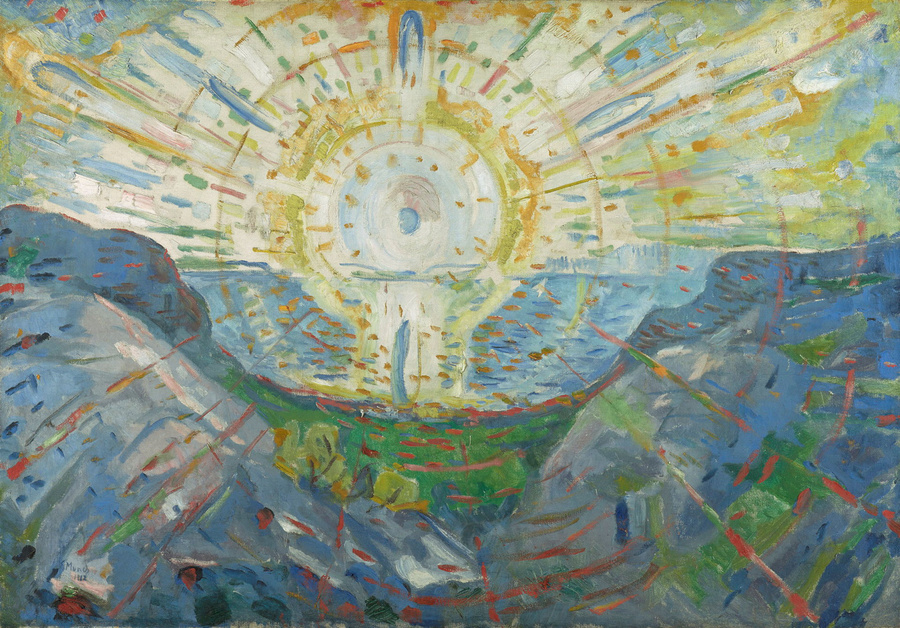