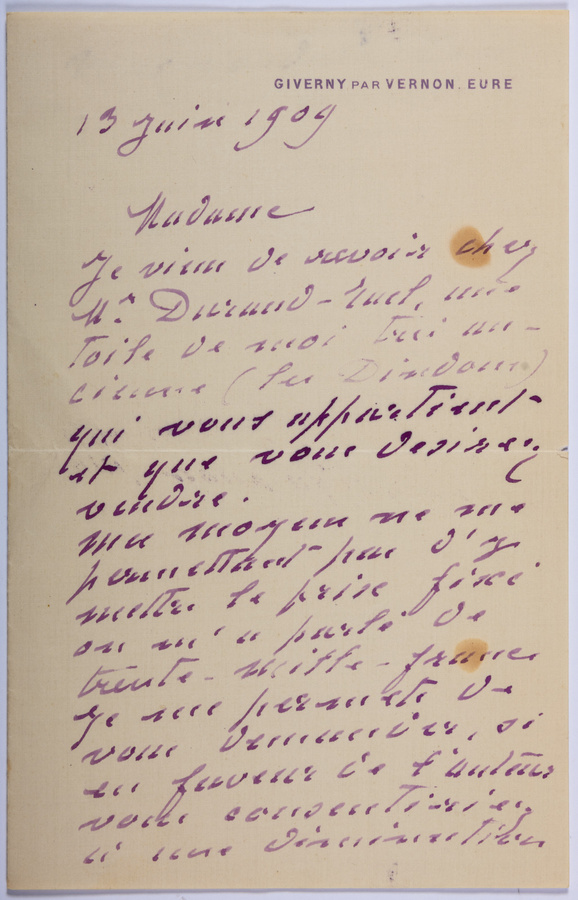 Citation
June 13, 1909
Madam
I have just seen again at Mr. Durand-Ruel’s, a very old painting of mine (The Turkeys) which belongs to you and which you wish to sell.
My means do not permit me to pay the price set there (someone mentioned a price to me of about thirty thousand francs. I make bold to ask you if, in deference to the work’s creator, you would agree to a discount. Please forgive the liberty of my request. Yours sincerely,
Claude Monet

The entry of this unpublished letter into the Musée d'Orsay collections, thanks to the generosity of the Société des Amis des Musées d'Orsay et de l'Orangerie (SAMO), completes a body of correspondence already in our holdings relating to the history of one of Claude Monet's masterpieces in the national collections, The Turkeys. 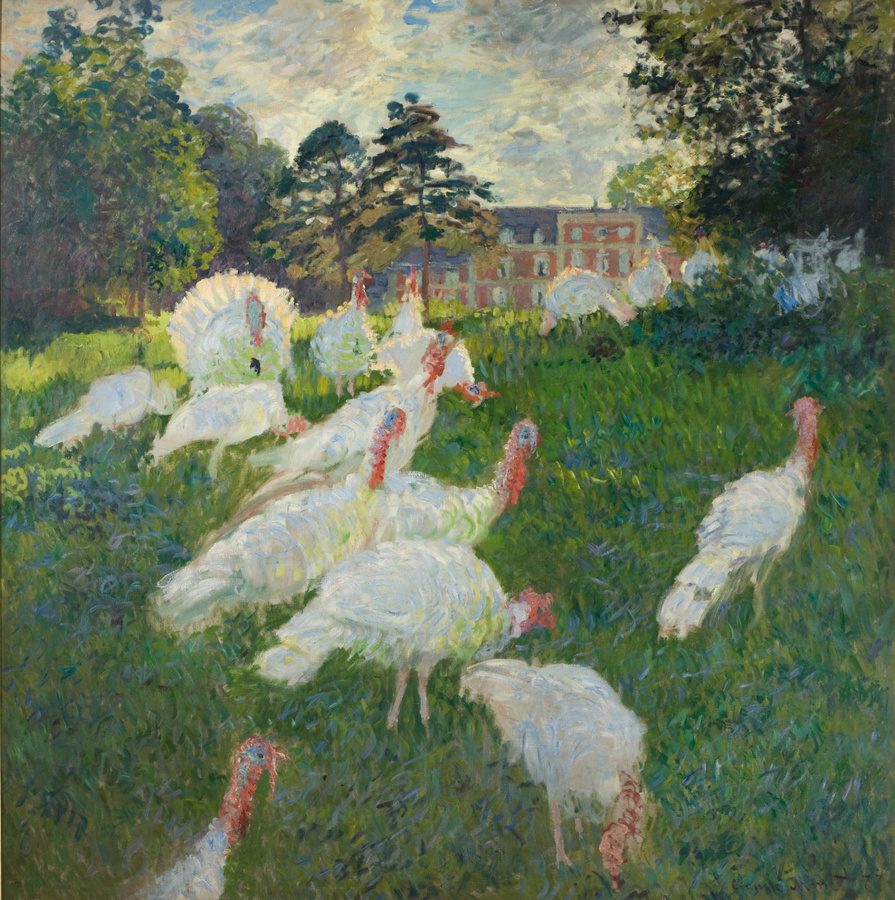 Painted for the patron Ernest Hoschedé, who commissioned Monet to decorate the grand salon of his Château de Rottembourg in Montgeron (Essonne), this painting was exhibited under the title “Les dindons (décoration non terminée)” [The Turkeys] (unfinished decoration) at the Impressionist group's third exhibition in the spring of 1877. The work had a special importance for the artist, who was always interested in his future and repeatedly sought to buy it back. The work changed owners several times before it entered the national collections. In 1878, it passed from the hands of Hoschedé to those of the painter Giuseppe de Nittis, was bought in 1884 at the sale after Nittis's death by the critic Théodore Duret, and then, when the latter sold his collection in 1903, by the Rouen amateur François Depeaux, before being acquired in 1906, at the Depeaux sale, by Princess Edmond de Polignac, Winnaretta Singer (1865-1943), a wealthy American heiress and art patron.

Monet's letter to Winnaretta Singer of June 13, 1909, tells us that the wealthy American entrusted the work for sale to Durand-Ruel, who asked 30.000 francs for it. Monet addressed Singer directly to ask her if she would consent to a “discount” “in deference to the work’s creator” for this “very old” work. In a letter acquired by the Musée d'Orsay in 2006, the Princess of Polignac finally replied to Monet (on June 25, from London): “I parted with regret with your admirable painting – only because I had been unable to find a home worthy of such a beautiful work – I have just bought a house in London of which “Les Dindons” shall be the most beautiful ornament - You will therefore forgive me, my dear Master, if I do not respond affirmatively to your request” (Monet Fund ODO 2007-1-161).

The painting was finally bequeathed to the Louvre Museum by Winnaretta Singer upon her death in 1943 (handwritten will dated July 5, 1938).